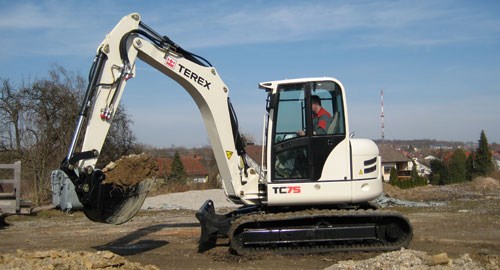 Instant Download means there is NO shipping costs or waiting for a CD or paper manual to arrive in the mail! You will receive this manual TODAY via Instant Download on completion of payment via our secure payment processor. We accept ALL major credit/debit cards/paypal.
Just buy this Terex TC75 Excavator Service repair manual now and you will get you job done immediately because in just a minute you will have your manual downloaded.
All pages are printable.

This Terex TC75 Excavator service manual provides data, characteristics, instructions and methodology to perform repair interventions on the vehicle and its components.

This manual includes special notes, important points, service data, precautions, etc. that are needed for the maintenance, adjustments, service, removal and installation of vehicle components for Terex TC75 Excavator.
The most detailed, comprehensive step by step procedures, explanations, and pictorial diagrams from bumper to bumper you will ever see for Terex TC75 Excavator.

Terex TC75 Excavator Service Repair Manual meets all your information needs to repair or make some adjustments to your Terex TC75 Excavator Service Repair Manual. This manual is intended as a handy, easy to read reference book for the mechanics and DIY persons. Comprehensive explanations of all installation, removal, disassembly, assembly, repair and check procedures are laid out with the individual steps in sequential order.

Adjustment and repair operations include reference to Service tool numbers and the associated illustration depicts the tool for Terex TC75 Excavator. Where usage is not obvious the tool is shown in use.

This Terex TC75 Excavator service manual can be viewed on any computer, as well as zoomed and printed.
This service manual has been specially prepared so that the explanation is very simple. It has been prepared so that if this manual is thoroughly read, even comparatively new personell can give satisfactory after services to the customers as well as disassemble and maintain the vehicle.

All service and repair instructions included for Terex TC75 Excavator.
Always use the correct special service tools or equipment specified. Under no circumstances use makeshift tools or equipment since the use of substitutes may adversely affect safe operation.
Where accurate measurements are required, they can only be made using calibrated, precision instruments.
Providing that the service schedules are respected, the customers can be sure of obtaining the maximum satisfaction and best result from his car. This manual provides general descriptions for accomplishing service and repair work with tested, effective techniques. Following them will help assure reliability.
Information on the construction and function are included. This part should be understood before proceeding with troubleshooting, disassembling and servicing. Information on the troubleshooting, servicing specification lists, tightening torque, checking and adjusting, disassembling and assembling and servicing which cover procedures, precautions, factory specifications and allowable limits.
Information in this manual for Terex TC75 Excavator is divided into groups. These groups contain general information, diagnosis, testing, adjustments, removal, installation, disassembly, and assembly procedures for the systems and components. Appropriate service methods and correct repair procedures are essential for the safe, reliable operation of all motor vehicles as well as the personal safety of the individual carrying out the work.

The illustrations in this manual are used to highlight the fundamental principles and procedures of basic interventions. They may not show exactly the Terex TC75 Excavator in your possession.

Adjustment and repair operations also include reference to wear limits for Terex TC75 Excavator. Relevant data, useful assembly details all in this SERVICE MANUAL for Terex TC75 Excavator.
In order to perform the work efficiently and to avoid costly mistakes, read the text and thoroughly familiarize yourself with procedures before starting work.
All work should be performed with great care and in a clean working area with adequate lighting.

Please peruse and utilize this manual for Terex TC75 Excavator fully to ensure a complete repair work for satisfying you or your customers by keeping their vehicle in optimum condition.
All information, illustration and specifications contained in this manual are based on the latest product information available at the time of publication approval. The specification, maintenance and other information for the components are included, and diagnostic information has also been added where necessary. These torque values are intended for use in service assembly and installation procedures using the correct OEM fasteners. When replacing fasteners, always use the same type (part number) fastener as removed.
This Terex TC75 Excavator book outlines procedures for servicing and repairing vehicles using safe, effective methods. The procedures contain many NOTES, CAUTIONS and WARNINGS which should be followed along with standard safety procedures to eliminate the possibility of personal injury or improper service which could damage the vehicle or compromise its safety.

This manual for Terex TC75 Excavator has been issued to provide you with technical information regarding the design, function, disassembly, adjusting work and troubleshooting on the components and model of the Terex TC75 Excavator.
The descriptions are brief but precise and are supported by photographs, notes, drawings and schematics, as well as exploded and sectional drawings. All this information is intended to simplify any necessary repair work which can be performed on Terex TC75 Excavator.
This manual also contains information about adjusting work and valuable reference data for such adjustment values.
For all maintenance and repair work on Terex TC75 Excavator, all accident prevention guidelines must be strictly observed. To perform all repairs listed in this manual, a complete set of standard tools, as well as the special tools and fixtures shown and listed are necessary.
No special emphasis is put on replacing sealing components as we assume that these items are replaced during any repair. Unless specific values are given, all threaded connections should be tightened according to the required tightening torques listed on torque charts.
When describing work, which can be dangerous, we have described the required safety measures in this manual and indicated them by special remarks DANGER, CAUTION or NOTE.

This Terex TC75 Excavator Service Service Repair Manual QUALITY manual is 100 percents COMPLETE and INTACT, no MISSING/CORRUPT pages/sections to freak you out!

This manual for Terex TC75 Excavator is designed primarily for use by trained technicians in a properly equipped workshop. However, it contains enough detail and basic information to make it useful to the owner who desires to perform his own basic maintenance and repair work. The work can only be carried out if the owner has the necessary hand and special service tools to complete the job.
A basic knowledge of mechanics, including the proper use of tools and workshop procedures is necessary in order to carry out maintenance and repair work, satisfactorily.